I have finally completed the last stage of our homemade real nappy system - wool nappy covers. 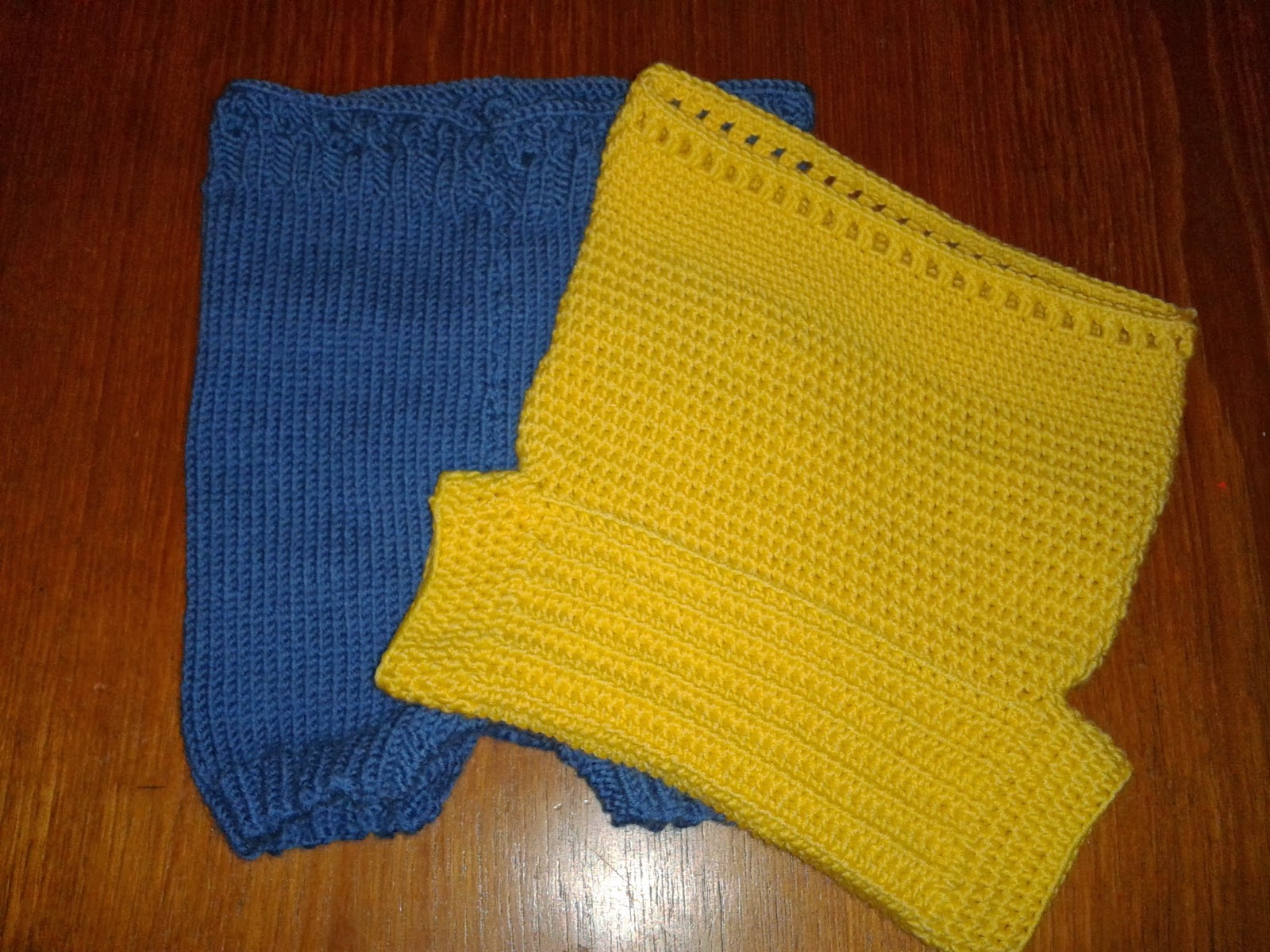 I decided to try wool for several reasons:


The biggest incentive for me to try wool covers is my own hatred of waterproof clothing.  I mean I really hate it, I would rather be wet.  I have tried any number of waterproof coats over the years, including incredibly expensive 'soft' and 'breathable' fabrics and all of them have been sweaty and uncomfortable.  I do not like them, and the thought of my baby experiencing that discomfort on such a sensitive area was not a pleasant one.

It may be an unnecessary concern, I know that huge numbers of people are using synthetic waterproof covers, both as outer wraps and as part of all in one nappies.  In fact I have recently been given a number of Tots Bots all in one nappies by a friend whose son has outgrown them and they do feel soft and comfortable, and I certainly will be giving them a try, but I wanted to have an alternative.
So I have made some woollen covers to use with my handmade nappies.  I have made two different types to test out, one is a knitted pattern (gah knitting!  It took me weeks and weeks!) that I found through Ravelry, and is available on Mrs Flowerpots blog.

I really like these, they are very cute and look like they will fit comfortably.  Being knitted they are quite a thin fabric so shouldn't feel too heavy for the little one or restrict her movements.  They did however take me forever to make.  They are also very long in the waist, as shown below on my childhood doll Sammy.  Sammy is somewhat larger than a newborn (I hope!) so these may need folding down to fit our new arrival for a while.

After such a long battle with the knitting (in fact half way through as I was loosing the will!) I decided to have a go at some crochet ones.  I had a look round for a crochet pattern but couldn't find anything I really liked.  However a number of the knitting patterns I looked at just seemed to be a rectangle with leg holes at the side, no particular shaping or gusset like on the knitting pattern above.  So I had a go at my own crochet pattern along these simple lines.

It is, as a crochet fabric, much thicker than the knitted pair so is somewhat stiffer and I'm not sure how this will work out for wearing.  It also doesn't sit quite as smoothly as the knitted pattern given the lack of shaping and was slightly more difficult to get one due to the placement of the leg holes, not sure how either will go on to a wriggling baby rather than a static doll though.  It was however, significantly quicker to make! 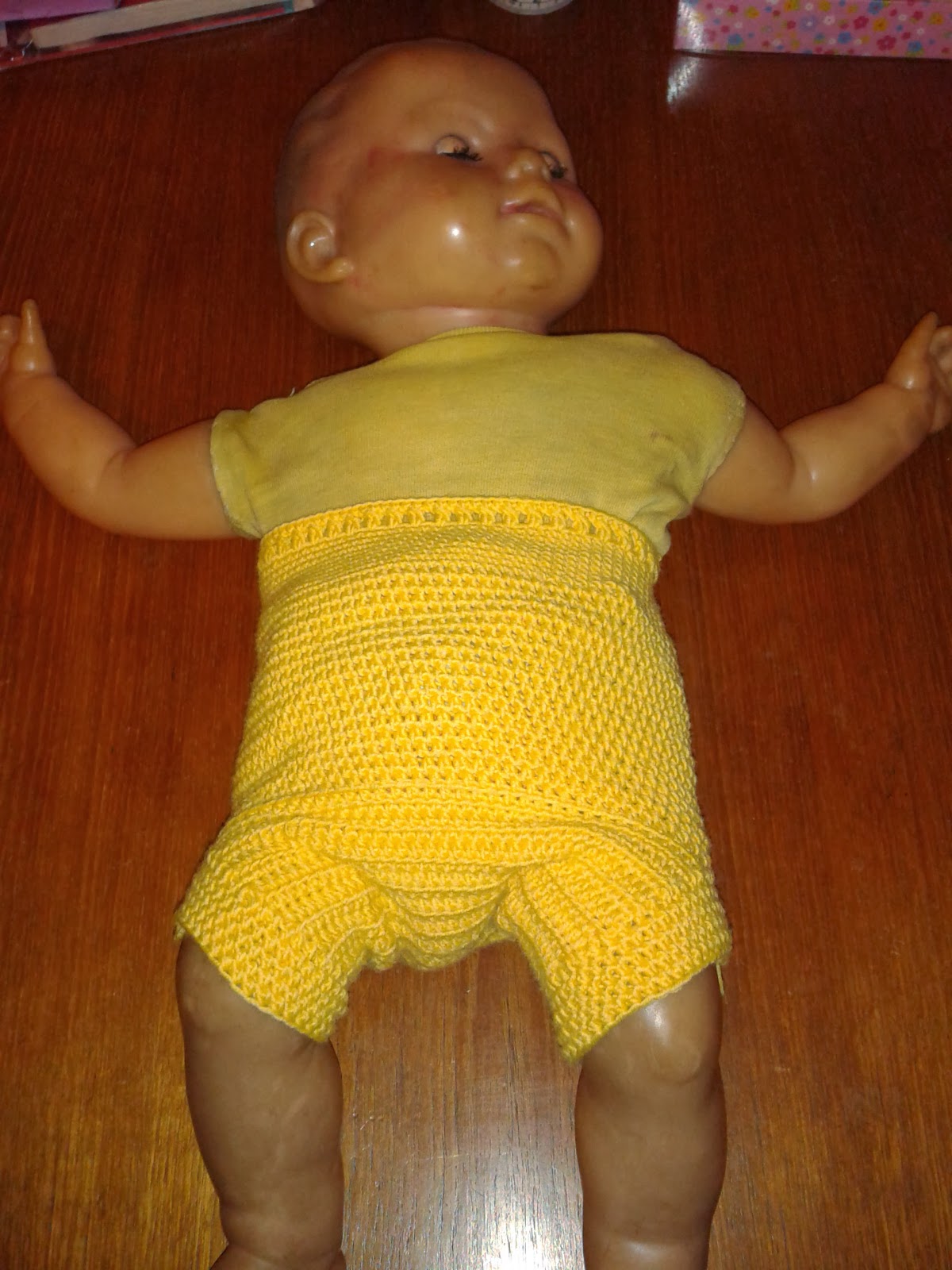 Two pairs should be enough to get us started (they don't need washing after each use, just airing I am reliably informed by current users), so we can have a chance to see what works well and what doesn't.  If the crochet pants work, I shall definitely make some more, and will post a pattern for them.  If the knitted ones work best I think little one will be making a plea to her grandmothers' for additional pairs, as much as I want to be a knitter I'm just not and it's very disheartening to take so much time making something so small!

They aren't necessarily a budget option.  In order to be effective they need to be at least 80% wool, I have gone for 100% as I figured if I was going to give it a try I might as well go for it.  Real wool yarn is not cheap, one pair used just over 60g and the second pair just over 70g.  I did manage to find some 100% wool in the sale at £2.20 per 50g which was very good, but most 50g balls came in closer to £5.  However, given how little has been spent on the nappies to go inside these covers I figure we're still winning!  Also you don't need as many of these covers as you do nappies so even at £6 or £7 a go it's not too bad.

I also want to have a go at making a flat 'wrap' type cover the same sort of shape as the nappies, as I have a feeling that this may be easy to get on and off than the pull ups.  So I will be spending sometime with my graph paper and a pencil figuring out a pattern for that.
Posted by Nell at 09:52