Not quite raisin schnecken!

We visited Achern in the Black Forest in Germany when I was younger and where we stayed a bakers van drove round every morning selling the most amazing baked delights.  My favourite of these was raisin schnecken, a spiral cinnamon sticky bun with a glut of raisins.  I've tried several recipies to replicate them and as yet have not found anything quite right. 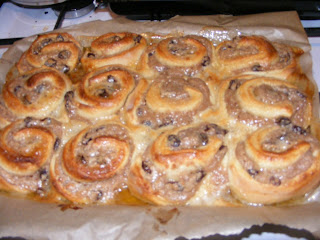 I used the Nigella recipe for the pastry, chocolate bun recipe for pastry creme (swapping cocoa flavour for cinamon and adding raisins) then made the syrup from Nigella to put on top.

Email ThisBlogThis!Share to TwitterShare to FacebookShare to Pinterest
Labels: Baking