This week was Arthur's 30th birthday and I wanted to make sure it was duly noted and celebrated in some sort of style!  When his sister turned 30 last year we bought her 30 presents (an idea I shamelessly stole from a friend celebrating her husband's 40th) and wrapped them all in different papers.  It worked really well but I didn't particularly want to repeat it, I wanted something new.

So, I decided it would be a great idea to bake 30 individual cakes in 30 different flavours. I started writing a list of flavours to do and got pretty stuck around number 20, but with a little help from my friends and my mum I finally had a list of 30 that I thought Arthur would like and were different enough to be interesting.

I found some lovely sized ramekins in Wilikinsons (about 3inches diameter) to bake them in which was great as I only had muffin/cupcake moulds (too small) and full size cake tins (too big) so that was a relief.  My mum also very kindly offered to make some of them as 30 different cakes is quite an undertaking, especially when trying to keep it a secret from someone living in the same house!

Here is a photo of all 30 (plus candles, presents and 81 chocolate crispie bites) on birthday morning, they went down pretty well, and he finally understood why he'd been banned from the kitchen for 3 nights!  It was also nice as when people came round, or when we went out later with friends we gave everybody their own cake. 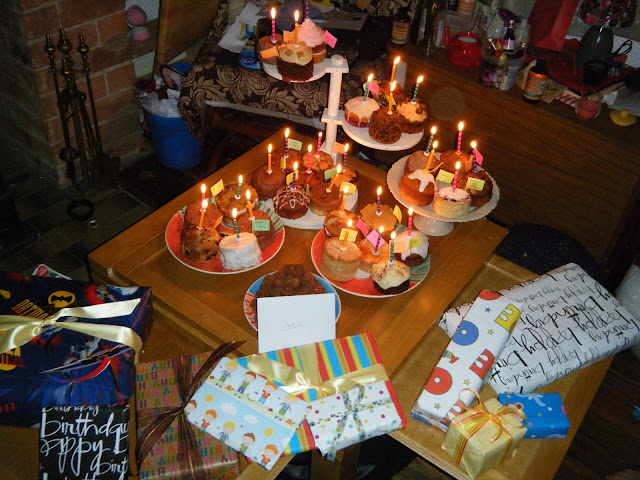 I won't bore you with the full list but some of my favourites are below; honey cake with rose cream icing, malt cake, and toffee sponge (I didn't have the foresight to take individual pictures before we started eating!) 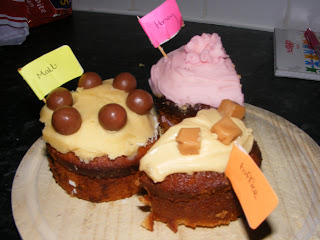